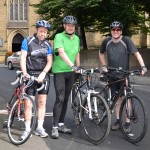 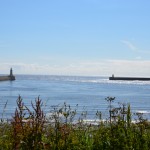 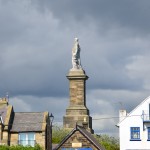 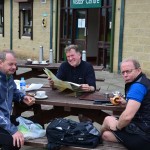 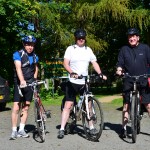 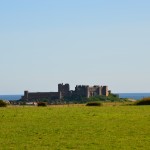 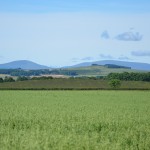 Glororum : Saturday morning. Nice place, shame no cyclists turned up. “We got lost…” 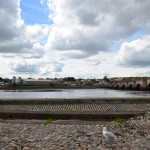 Berwick : Saturday afternoon. Much more attractive than anyone remembered. Michael – “I built that bridge you know…” 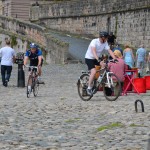 Berwick : Saturday afternoon. Michael and Roger fight it out for the Yellow Jersey. 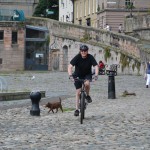 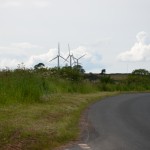 Coldingham : Saturday afternoon. Between Ayton and Tornes. Not too inspiring. 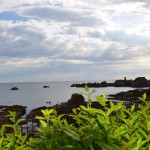 Dunbar : Saturday evening. The view from the front of The Rocks Hotel. A nice pint of IPA awaits. 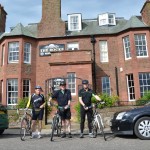 Prestonpans : Between Dunbar and Edinburgh – the (not very) picturesque view of the grey bay and power station. 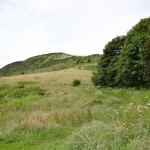 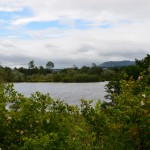 Edinburgh : the lake at Holyrood Park, below the South end of Arthur’s Seat. No cyclists again. 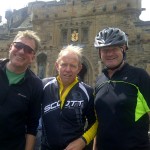 A tour diary by the support driver and Domestique

Newcastle to Tynemouth:
No hitches and Tynemouth looked great. Better weather than we’d expected too.

Tynemouth to Blyth :
Spending an hour contemplating the architectural delights of ASDA’s car park is not recommended. The riders had initiated what was to become a frequent occurrence and got lost, or as they preferred “changed their route”. So we went on to Bedlington Station to meet up. Other than the place being a total dump (sorry Bedlington-ites), no other problems.

Bedlington Station to Druridge Bay Country Park:
Another “improvised” route. We were meant to meet in Lynemouth. However this was a much nicer place, and we had a welcome picnic in the park, with a view over the Lake and a nice cuppa.

Druridge Bay to Boulmer:
Boulmer was shut. All of it. No, really. So we went on to Longhoughton, which while being Chava-central, at least had an open pub. A beer, some nuts and on again.

Longhoughton to Dunstan:
Noting off-piste this time. The Cottage Inn being a welcome sight. A couple of beers and a decent meal soon refreshed our intrepid combatants.

End of day one, no casualties : Total miles 61

Dunstan to Glororum:
More route improvisations. While I enjoyed Glororum, with it’s nice views of Dunstanburgh Castle, the team went their own way, at which point my notes become a bit hazy, as the next stop I’ve recorded is Beal. But there was a stop next to the North Coast Main Line where high speed trains screamed past us – but not sure where that was….

Glororum (or somewhere) to Beal:
Met up in a fairly unattractive pub car park in Beal, just off the A1. Very quick refreshments (only water), and on again.

Beal to Berwick-on-Tweed:
Nice to drop down the hill and across the old stone bridge, stopping on the way to buy provisions for the hungry “athletes”. While waiting for their arrival I found an very nice pub – The Barrels Alehouse – a lovely pint of Rivet Catcher in very quirky surroundings. Although Steve had coveted by Cornish pasty at Duridge, he failed to eat the ASDA one I’d bought for him – obviously too much for the highly honed physique to take. We agreed Berwick was much nicer than we’d remembered, and well worth a repeat visit.

Berwick to Ayton Castle:
Closed (a pattern’s emerging here). Again. So after water and an unasked for look at Michael’s toe, quickly on….

Ayton to Coldingham:
Well, it was meant to be Huxton, but that seems to exist only on the map and not in the real world. Coldingham was a bit bleak, unless you like wind turbines, but at least the grass was long enough for sanitary purposes.

Coldingham to Torness:
After only a slight mishap in the exact detail of the meeting place, which necessitated a daunting u-turn on the main A1, a quick stop-over in the shadow of the power station. Felt a bit like Quatermass.

Torness to Dunbar:
No more improvisation on the route, and it was nice to roll into a very nice seaside town. The Rocks Hotel was comfortable, had great sea views and excellent food. It was also packed with locals, all dressed up to eat out, in what must be the best restaurant in the area.

Dunbar to Haddington:
Quite a nice little town, a bit Corbridge-ish. A lot of old coaching inns etc., showing it’s past use as a staging post to Edinburgh.

Haddington to Prestonpans:
Back to the off-piste version of the route, with the riders missing out on Cockenzie. We met up in the car park of The Goth pub (no sign of any Bauhaus or Cure fans though). A pretty bleak place, but with at least some kind of sea view raising it just above Bedlington Station in the grot stakes.

Prestonpans to Arthur’s Seat:
We suffer our first casualty – me. I fell down in the mud (not that I got any sympathy), and the camera and I got covered. After an improvised bath in the car park using bottled water and tissues, and a change of clothes (not easily done in the back of a car), the athletes decided not to turn up (again). We planned to meet in the centre of Edinburgh, but I discovered that almost all the roads into the area were closed (thank you the town planning dept. of Edinburgh), and the ones that weren’t were jammed. Therefore..

Arthur’s Seat to Edinburgh Castle:
The cyclist took their lives in their hands and pressed on to the castle without their trusty support driver. This they did without a problem. (Some would say they could have managed the whole thing….). The nearest I got to the centre was back in Holyrood Park, where we all had a 99 (not a euphemism – a nice Mr. Whippy ice cream), and we saluted their success.

A fun (for me anyway) long weekend, with good company, plenty of laughs and some good scenery. And so, where to next year??

4 thoughts on “Edinburgh or Bust.”