The ride that very nearly didn’t happen really. Two out of three of the riders had suffered great physical misfortune and could therefore be excused from the normal gruelling trial. So rather than not do anything at all, it was decided to have a slightly more leisurely adventure.

We set off from Wylam and drove up to Kielder (Why do we always call going North “up”?) . This was uneventful, other than listening to the blood-curdling tales of Roger’s bike crash hospitalisation, plus calls from Steve of “I’ve had a bad back you know”.

Arriving at Kielder Dam and unloading the bikes revealed that Roger had broken his own puncturing record already, as he’d somehow managed to get a puncture while the bike was still on the car roof. So the first thing was to delay the “Depart” while he replaced his inner tube.

Once ready, loins were girded etc. and off they set for a half circuit of the lake, with a planned meeting at Kielder Castle at The Angler’s Arms.

They all arrived at The Angler’s without incident. Well, what could go wrong ?, other than someone riding into the lake – which, given our history, I wouldn’t put past any of them. No punctures or additional physical injuries either – all very tame stuff. 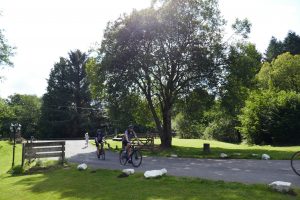 Now, let me try to describe The Angler’s Arms. Cinematic references can often be helpful here. So, if you imagine The Slaughtered Lamb pub from “An American Werewolf In London” (stop thinking of Jenny Agutter in the shower right now), crossed with just about anywhere/anybody from “Deliverance”, you’re on the right track. Is it something in the water ? If there’d been a piano player, he’d have stopped as we walked in, that’s for sure. Anyway the sarnies and beer were fine and prepared the riders for their next leg down the other side of the lake to Leaplish.

No problems again and all three arrived at Leaplish. Even after such low levels of rainfall Kielder still looks great, but it was clear that the level was lower than I’d ever seen it. At this point, Steve sensibly decided not to ride any further and risk his back deteriorating. He was worried that he’d not be fit to fly to Rhodes the next week, but mostly he knew that Lalage would have killed him if he’d not been fit to go.

So the final leg of the day was for Roger and Mike to ride back to Kielder Dam, which they did without incident. We then checked into the Riverdale Hall at Bellingham – an oft frequented haunt now.

Once showered etc. we took a stroll into the jumping metropolis that is Bellingham on a Friday. The first pub was shut. The next pub was plastered all over in St. George’s cross flags, either left over from the last World Cup, or else because it was run by the EDL. By the look of the clientele, I’d guess the latter. So after a very quick pint (no real ales at all – obviously too “foreign” looking for them), we used the excuse of being besieged by wasps to make our escape – The Slaughtered Lamb again came to mind. Back to the hotel, and after a rest it was into the bar for very nice beers, wine and an excellent dinner. The food and wine are always great here, with a very nice Californian Pinot Noir standing out for me. Even though the place looks ready to succumb to creeping disintegration at any time, it’s still comfortable and nicely remote from the land of the living dead back in Bellingham. 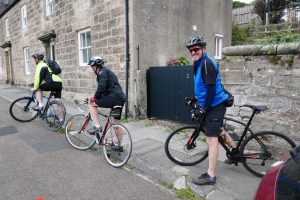 Steve was brave enough to tempt fate (and Lalage’s wrath) by joining in this quite short ride. So after releasing them at the edge of Rothbury I agreed to meet them at West Woodburn. The scenery on the way is so attractive – in a tough and almost bleak way. 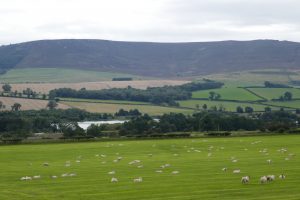 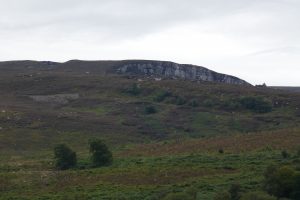 We met up, again without incident (what no punctures Roger??) at The Bay Horse in West Woodburn, just on the A68. 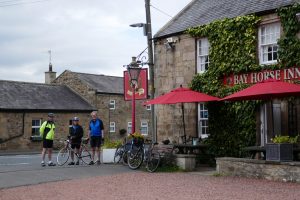 While a definite improvement on the last two pubs we’d been in, it was still rather dilapidated, and for a Saturday afternoon, pretty deserted too. However, the beer was good and thanks to the hefty full-english breakfasts no one wanted lunch. We did discover a possible alternative accommodation for another time, just to the side of the pub. 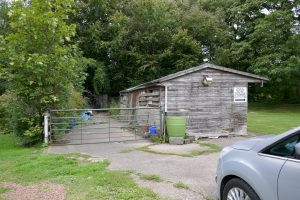 Steve reckoned it looked a bit too plush for us though.

Last leg, a short ride back to the hotel – all without incident.

After a wash and brush up, we decided to end the day with a walk to take the strain off Mike’s backside, reduce the risk of Steve annoying his back and let Roger’s ribs heal a bit more before tomorrow. So we drove to Otterburn and did the 5 mile “Otterburn’s Battlefields walk”. 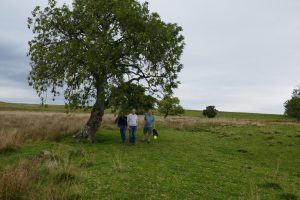 It’s an interesting walk up and down a hillside north of Otterburn, and was the site of Harry Hotspur’s English army getting it’s glutious maximus well and truly kicked by the Scots (hooray for our-side – well my side anyway). 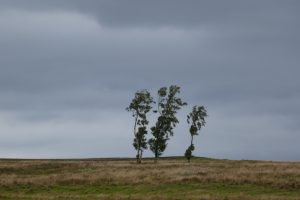 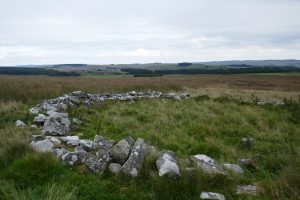 Some of the walk was through MOD artillery shooting range land, but luckily nothing was being detonated that day. One odd thing was that on the route we passed several warning signs that said “slow children were crossing” – it must be the after effects of all that ordinance. Over the whole route we didn’t see a single soul, just plenty of sheep and some angry looking cows with their calves that we gave a wide berth to.

So, back to the hotel, where they had warmed up the sauna for our return – very nice of them. It was just what was needed, Steve however never made it, after falling asleep on his bed. So two sauna sessions and a few lengths of the pool set us up for another very nice dinner, and some more excellent wines.

Steve made the decision not to risk his back again, and so after breakfasts of full-englishes all round, only Mike and Roger kitted up for the (truncated) ride home. To reduce the distance we all drove to Chollerford and they started the final ride from there. 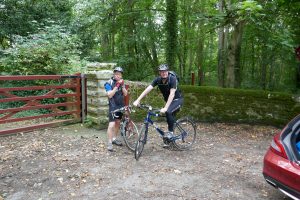 Steve and I drove to Corbridge, had decent coffees, read the papers, and then we all met up for the last leg. To save time I took Steve straight home to Ponteland, while Mike and Roger rode on down to Wylam. Again it all went off without incident – boring no ?     I think I enjoyed the days of punctures and getting lost on previous rides better. There also wasn’t a spot of rain all weekend, which spoiled it for me somewhat – there’s nothing quite as satisfying as watching three exhausted, soaked riders approaching, while you sit warm and dry in the car.

All-in-all another very enjoyable weekend in good company. Even with the enforced shorter rides, it was still great fun, and we all look forward to next year – hopefully injury free, and as we say every year SOMEWHERE FLAT.