Day One
….and so it begins, 2014’s challenge, riding from coast to coast, beginning in Morcambe Lancashire, ending in Bridlington Yorkshire. Don’t they look happy ?

Poor fools, they were unaware of what fate awaited them (and particularly to their rear ends). 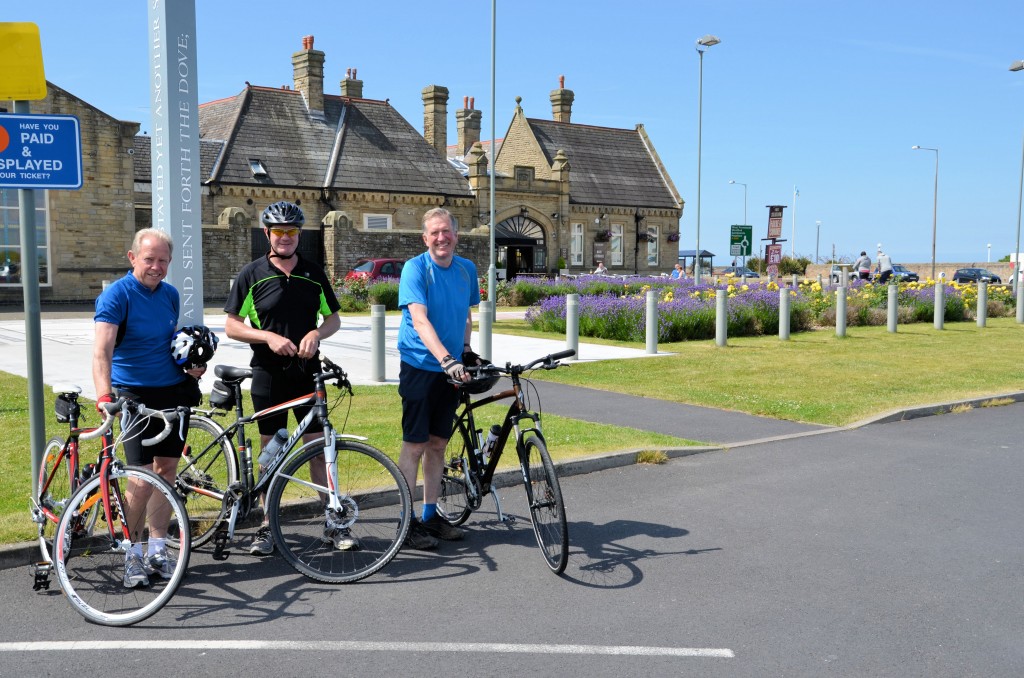 The starting point, Morecambe, so good they named it once…. well actually it would have been better not to, sorry but it’s a bit of a dump, even though it looks OK in the picture. Viewed in a postmodern way, one could revel ironically in the crap chip vendors, the run down bingo and the very sad amusements…….. But I just can’t ; loads of v obese children being taken there by v obese parents, so they can smack them in public.

Anyhow, soon away and on to our first rendezvous on Le Tour de Rose Rouge et Blanc.
Those who have read the previous descriptions of these little jaunts, will be aware of the former history the Riders have with their sense of direction and geography in general. At the first meeting point, which was meant to be Hornby, everything went mammary glands to the vertical (work it out). They got lost almost immediately (predictable if nothing else).

However, this time they did it in style by being almost on the correct road, but heading in completely the opposite direction. The walkie-talkies purchased especially for such eventualities, proved to be useless when hills are involved, and after much driving back and forth and one handed mobile phone use (sorry officer), we eventually made a new meeting point at Wray. 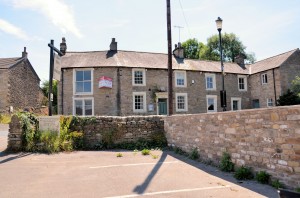 Wray has, or more correctly had, one pub. This was closed down and semi derelict, but still had a notice warning of parking misdemeanors.

However they did at least find it. Next stop Clapham , (no junction to be seen), but a nice little place, where beers were imbibed in the glorious weather.

There’s obviously money around here, nice cars and a lot of nice yummy mummies collecting their little precious from school in the four wheel drives.

A nice pot of Earle grey too. 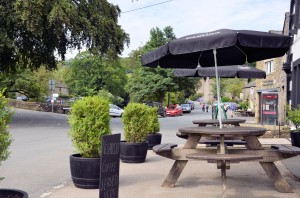 Final section for the day was to Giggleswick. No problems encounter, even though the hotel was a little out of the way. 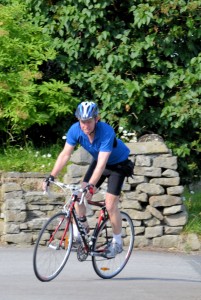 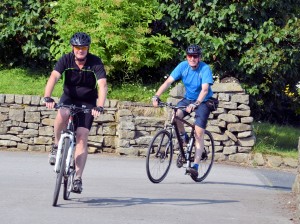 … followed by Mike and Steve

The Craven Arms was a nice little hotel / pub, with very good beer.

By chance it turned out to be quite a gastro pub, and the food was really excellent. Scotch Eggs with Chorizo for starters, followed by Pork Three Ways.

All helped down by four bottles of a Tempranillo recommended by Roger – which was excellent. 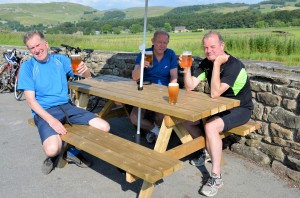 A very tasty full English breakfast to start, and out on the road for 9:30. This time I got lost immediately – but of course it wasn’t my fault at all – ridiculous road signs etc. (ahem). Their first big challenge was the biggest climb of the tour, up to the top of Malham Fell . A really daunting sight it was too. 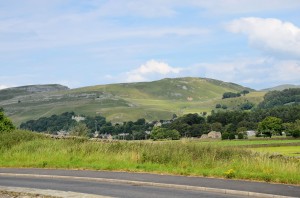 View of the morning climb

I caught up quickly and stayed near them on the way to the top, in case of breakdown, injury or exploding buttocks – though being such toned athletes they didn’t need it.

Really hot and sunny all the way, showing the beautiful countryside off to great effect. A couple of quick stops before a nice sarnie-based lunch in the park at Pateley Bridge, where we watched the crown green bowling while the riders cooled their heels for a bit.

Thanks to the climbing and the heat, the riders were starting to look tired, and bumus ouchus disease was setting in. Michael had apparently been too ashamed to use his BAM Nutall fleece he’d brought especially as a buttock insulator, probably after the criticism he faced for last year’s Noddy gloves. 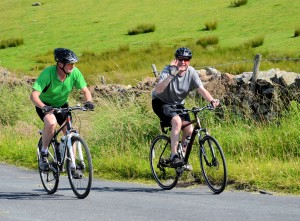 More climbing – and no padding

Next stop Fountains Abbey, well the car park at least – never got to see the Abbey itself, which is very nice I’m told. While waiting for their arrival, I eavesdropped on a conversation via the walkie talkies, between a crane crew lifting heavy weights, but I bit my lip and didn’t sabotage things.

Still very hot, so made sure they kept up the fluids.

Next stop was the Lamb and Flag in Bishop Monkton – another very pretty, well to do village. The locals treated me with quite a bit of suspicion as I wandered about in my Sun Records T-Shirt with my camera – obviously they were sure I was casing the joint for nefarious reasons – lots of curtain twitching and just plain overt staring, and me so innocent. As it turned out the pub was closed anyway, so we carried on to the next village, whose name escapes me (too much sun on the bald pate you know). 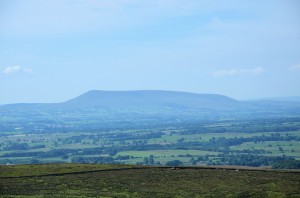 Yet another lovely village and again very well to do. The four customers sitting at the outside table when I arrived consisted of two fancy dress dummies and two locals, it was difficult to tell them apart. Very good beer again – pint of Lanlord I seem to remember.

The pub had the most un-PC men’s toilet I’ve seen for years. It was amply decorate throughout with pictures cut from Penthouse and Playboy (naughty magazines I’m told, of which I know nothing). The drinks went down particuarly well with the hot and sweaty athletes. 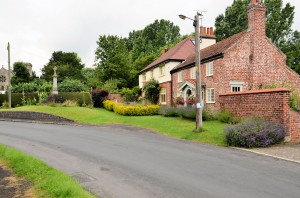 Can you see the curtains twitching?

On to Great Ouseburn. Another very quiet and picturesque village with a lovely church and another closed down pub. As I waited for their arrival, the owner of the house I’d parked outside of, actually came out and stood and stared at me for several minutes. Why are these people so xenophobic ? They must really hate Sun Records.

The last leg of the day was on to York. I was pre-warned there would be problems with the hotel parking, as they were refurbishing. This meant unloading the entire car out front on my own (ahh poor me), dragging it all up to the rooms, and then back out to park the car in a council car park down the road. The extra hassle was made worse by the fact the hotel charged £5 for the privilege ! However this was offset by a very pretty, helpful girl on reception who did her best to make it easier.

The riders finally arrived late around 8:00 pm and they all looked knackered – unsurprisingly having ridden for the best part of ten hours and covering more than 70 miles, a lot of it up steep climbs (I was tired too you know, those bags were heavy – especially Steve’s, it being full of his drugs stash of jelly drinks and exotic unguents).

This was all forgotten when we went around the corner to a very good Indian restaurant (The Viceroy 4.5 on Tripadvisor) that I’d seen on the way in. Authentic Yorkshire Indian Shikh Kebab and Chicken Nawabi Khana – very good indeed. Plenty of Cobra to refresh and re-hydrate too.

Steve and I’s room unfortunately turned out to be sited over Hades as it was boiling hot all night. I did at least find a good use for the Gideons Bible – wedging the window open. This made barely any difference, and as a result I hardly slept (please, no sympathy). Steve was so knackered he was out like a light, which meant he didn’t hear the weird clicking sounds in the night that had me convinced there was something nasty somewhere about.

Good big breakfasts all round (well I needed to keep my strength up), and out on the road by 8:30. Still quite humid and warm, but very overcast with a promise of rain to come – which it did, leaving mud on the roads, most of which seemed to end up on Steve’s back. 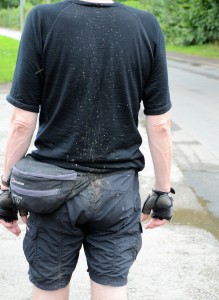 At this point the stops all seemed to merge into one, especially as the terrain was flat and actually quite boring – but good for riding I suppose.

All three athletes were now complaining of tired limbs and backsides, but they kept manfully on, fuelled by Jelly Babies and the rest of Steve’s drug supplies – dodgy looking “energy” things – I blame his wife the marathon runner, a bad influence if you ask me. 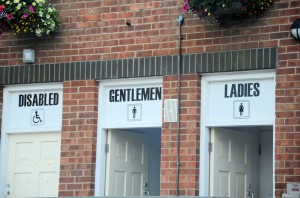 The most welcome thing in Pocklington

So Stamford Bridge, Pocklington, Kirkburn and Burton Agnes all swam past, until at last they rode into that jewel of the east coast that is Bridlington.

Wow another dead English seaside resort, chock-a-block with chips and bingo, but very few people about on the streets. However all the car parks were full, so God only knows where they all were – inside the bingo halls and pubs would be my guess. 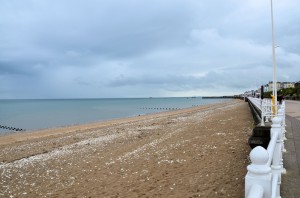 Congratulations to the riders, a big achievement and a total of around 180 miles in three days over difficult terrain. Well done men! 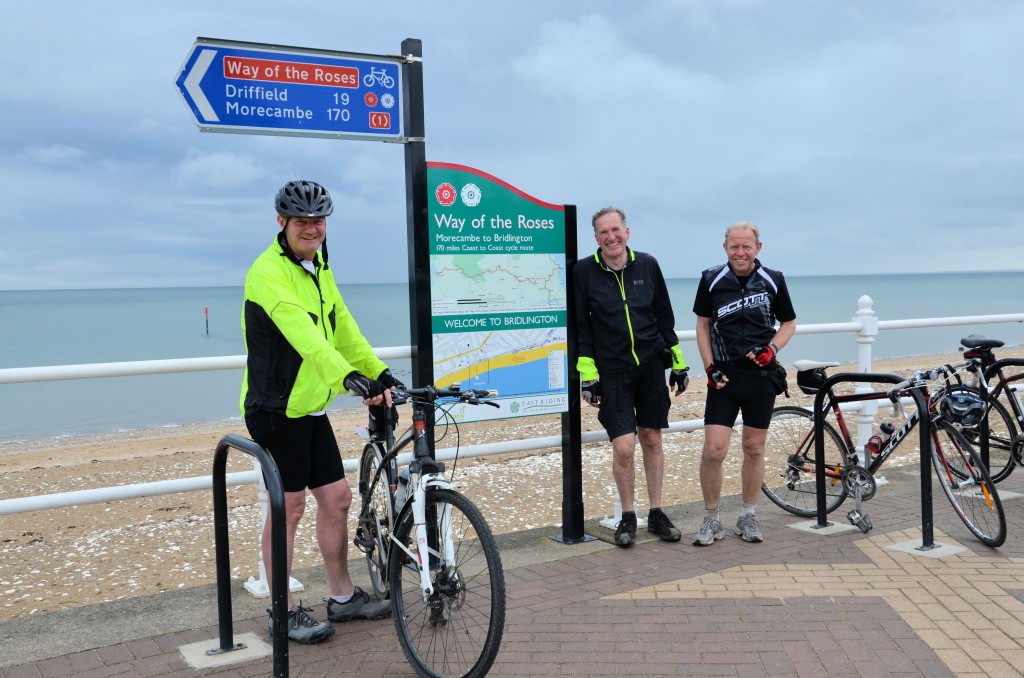 As we didn’t fancy the pubs in Brid, just a quick photo of the end point and then off out of it.

One thought on “Way of The Roses – Or Bridlington by Bike”