Stage One
Wooler to Alnham 16 miles
The start of this needs to be very mock-profound and very silly, but I can’t think of anything right now, as we’re all feeling deeply gloomy and thoroughly ashamed of the voting behaviour of our nation and it’s small minded xenophobic tendencies.  Maybe I’ll think of something more light hearted before publication. 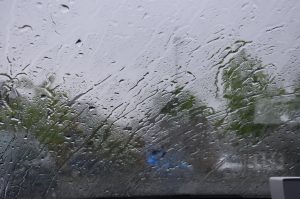 A nice day in Wooler

Biblical conditions on arrival in Wooler. Torrential rain,with thunder and lightening prevented us from even getting out of the car. I suppose it could have been worse, at least there’s no sign of a  plague of locusts or frogs etc.

The rain brought back worrying memories of Mike’s fetishistic rubber cape ensemble from last year, but thankfully he didn’t have it with him this time. His reason being that it “chafed around the neck” – hmmmm just hoping that was  only experienced during cycling. 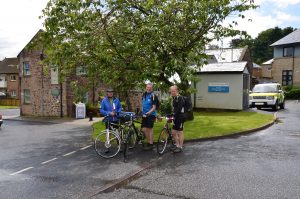 Once the thunderstorm abated the cyclists braved the clearing conditions and set off for Alnham.

Lovely countryside on the way, 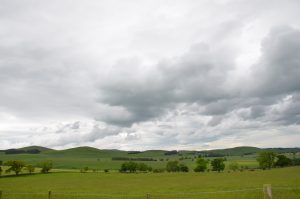 Altham turned out to consist of nothing more than a rather smelly farm, with the usually “friendly” farmer staring at a non-local like me and sharpening his scythe meaningfully. This was off-set by watching the sheep dogs “surfing” around the corners on the back of the shepherd’s quad bikes, looked like great fun (for the dogs).

The athletes appeared a bit late and struggled up a rather steep climb. 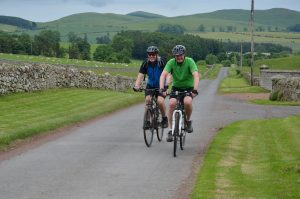 It was clear on arrival that Steve was really keen to get amongst his drug stash already.

Roger is a hard line Jelly Baby user and shuns all of Steve’s illicit gear. 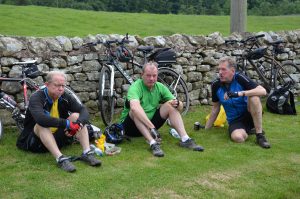 At this point Steve also revealed his packed lunch (oo err matron!), which consisted of a large carrier bag full of sandwiches, pies, crisps and chocolate bars. Just as well, as all the other two had between them was a small Chinese take-away box half filled with nuts and raisins.

Dry and warm now, if a bit heavy with the promise of another deluge. Fear not, gentle reader, I’ll be fine in the car, and after all who cares about the bikers?

Thus spake the oracle, for not 5 minutes out of Altham the heavens split asunder (anyone sick of the Biblical slant yet?) and I was smitten by an incredible deluge. After almost getting stuck in a couple of floods and then coming up against a closed road, I did the  decent thing and turned around to rescue them. After various life threatening adventures that I’m far too modest to mention, I found them two miles out of Alnham hiding, (sorry sheltering), under some trees looking miserable (what else is new?). We drove on through torrential downpours, during which, at one point, I swear I saw a Charlton Heston look-alike with a white beard and a big stick, who seemed to be  trying the part the waters for a bunch of scruffy urchins to pass through. 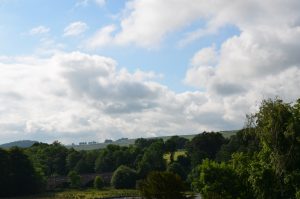 Drove on to Elsdon. 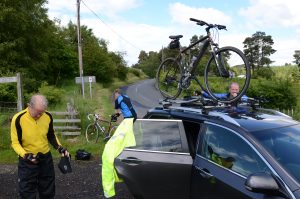 Back in the saddle

Beautiful sunshine encouraged them to get back on their bikes (the vampire Lord Tebbit would have been proud), and I left them to it and headed on to the lovely Riverdale Hotel. When I checked in I found I had a really nice room with a balcony and nice views. It’s just a pity the shower was like being gently breathed on by someone with slightly damp breath.

Within minutes of arriving the skies darkened and the rained erupted in another deluge. I thought fleetingly of a rescue mission, but not knowing exactly where they were, I soon did the sensible thing and stayed put, well after all they decided to go bike riding in a British summer.

The riders arrived eventually and were absolutely soaked (again) and looked cold and miserable (some may say their natural mien).

However an excellent dinner of fillet steak with copious bottles of red did it’s best to make up for a fairly miserable day.

It seems pertinent to point out at this point, that this was the first event of this kind to which we had invited the WAGs. Is it purely a coincidence that the occasion was then slightly marred by the wrath of God ? I refuse to comment further.

Circuit of Kielder Reservoir.  Around 27 Miles (and a lot less than they will tell you I bet).

After a great “full-english”, the riders set off for their day at the lake. I was given the day off, so I’ve no idea what they got up to, or how often they managed to get lost (they say never – believe that if you will). Meanwhile the WAGs went for a walk around the Lake, while the angered Rain Gods did their best to show their displeasure. 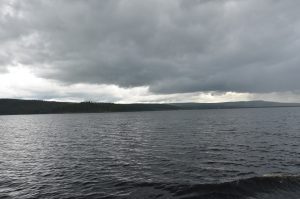 I then had a nice (dry) time on the Kielder ferry (The Osprey) chugging around the lake in more torrential rain. The Captain was an interesting specimen. Long blonde mullet (going bald on top), diamond earrings, tight trousers and a shirt unbuttoned  to the waist, obviously what passes in these parts for a Lady’s Man. 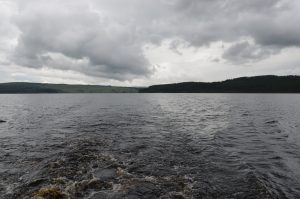 The riders got back to the hotel early, the WAGs trailing in sometime later looking damp. So after we all had drinks another grand meal was heartily demolished. One or two “cold drinks” were also imbibed, leading to some slurred speech and staggering (on the part of the WAGs of course, we men being made of hardy stuff – well apart from Mike obviously – remember the big girl soft gloves?).

While the cyclists headed for home, the WAGs and I went off for a nice 6 or so miles walk. This turned out to be mostly through a (very wet) peat bog, but did I complain (yes).

The cyclists had a nicely uneventful ride,  arriving back in Ponteland to beautiful weather, and we all celebrated with glasses of cold fizz in Steve and Lalige’s back garden.

All in all a grand weekend was had by all, despite the various downpours.

The fact that the total mileage was a little less than they had previously done in a day is nothing to do with their advancing years or lack of enthusiasm (honest).

As for next year, Spain has been mooted, sounds good to me (NO RAIN)!!