…..and the annual sweat-fest is with us again. Bums have (hopefully) been hardened, toned and oiled. Roger will no doubt (almost) silently slide through without a problem. Mike will have outlandish clothing to explain away, and Steve will be the tour’s Keith Richard, replete with “substances”.

Day 1 begins with a car journey to Kirkcudbright to start the grueling Reivers route, it’s not beginning too well, as we drive through heavy rain, looking fairly bleak for the start of the ride. 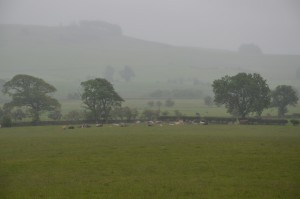 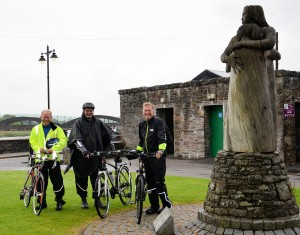 Arrival in Kirkcudbright safe and sound and ready for the first section.

First stop is Castle Douglas. Can’t see a castle, and anyone could be a Douglas (even the females). Fairly grotty, not helped by incessant rain. Most uplifting aspect is that Mike has immediately unveiled this year’s embarrassing clothing statement.

His bizarre black plastic poncho making him look like a fetishistic gaucho. What larks! 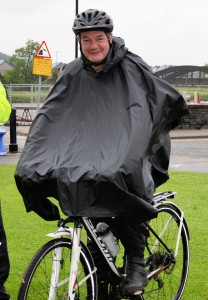 Second stop is Milton. I believe the poet of that name was blind. Just as well if he lived here. The dreek mizzle continues unabated. I’ve hardly ventured out of the car in case I get wet – yes, I know, poor me.

Next stop is the exotic landmark of a Tesco Extra car park on the edge of Dumfries. Wow, I think I’m having a spiritual experience, there’s a strange alien yellow glow in the sky…..oh yes, I forgot that’s sunshine – who knew? 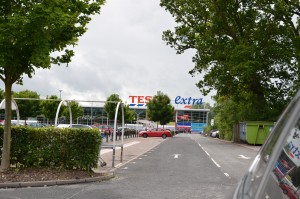 Next we pause at Ruthwell, a rather pretty village on an old single track road. Very quiet and pleasant. Helped enormously by the fact that the sun has squeezed out a bit more welcome warmth and the rain has abated somewhat. 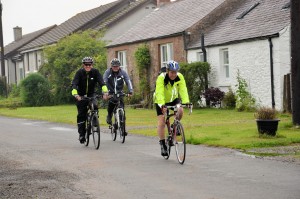 I need to note at this point that before they started all of the riders put on snazzy overshoes to keep their little tootsies dry. Steve had to go one better and produced a neoprene cover for his hat, intended to keep out the rain. As he said, “there’s nothing quite like nicely tight fitting black rubber stretched over the end of your helmet”. (fnar! fnar!).

The quaintness of Ruthwell is enhanced by the fact that it is home to a tourist attraction that you really couldn’t make up. “The Savings Bank Museum”. No, really. Unfortunately (fortunately?), it was shut, or I could have regaled you with tales from the wild edge of accountancy, double entry book keeping and franking machines. 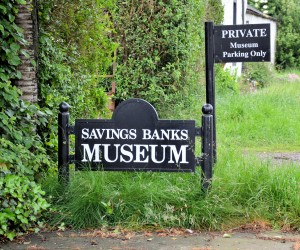 Next stop Annan. Which is quite a nice town, with a nice bridge. Right on the bridge is the Blue Bell public house, and for the sake of furthering scientific investigation we had a pint of Boon Doggo. 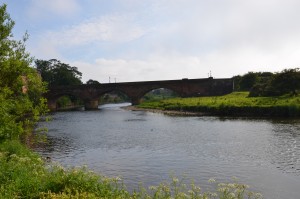 Well, those who drink proper beer did, while Roger and Michael had lager !! They need to be trained in the finer things of life.

Now on to the final stage to the Gretna Hall Hotel in Gretna Green. The rain holds off for the entire stage, and we even get more sun. By the time we reach the hotel the weather is perfect. The hotel looks nice from the outside, set in good grounds and on a hillside. Inside is a bit different, very reminiscent of a cross between Acorn Antiques and The Crossroads Motel. 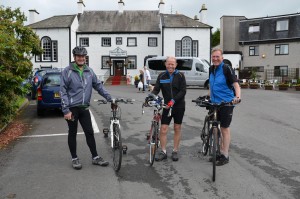 A bit run down with a very eccentric layout, and weirdly uneven floors – death traps to those who need a bottle of Merlot with dinner – oh yes, that’s us. The other guests seem to be almost entirely over 75, thus making Roger feel at home. The dinner was very good and the 4 bottles of Merlot were just what was needed, especially when it turned out they only charged us for 3.

Lovely morning for the depart, sunny, with no wind and most importantly, no rain. After a good breakfast (including Haggis; and I know someone who knows what haggis is in French !!), a nice drive through lovely countryside to the first stop at Catlowdy – luckily not a cat in sight. I was particularly glad to have a stop, so that I could find the source of the smell wafting through the car all morning. I couldn’t find the rotting corpse that it smelled like, but eventually discovered the source to be from a wet and very stinky pair of Mike’s trainers, that he’d thoughtfully secreted under my seat. Just stopped short of binning them, but threw them out of the window to allow the sun to kill off a few bugs. This action was almost a disaster, as I drove off leaving them in the road. Once I’d realised, I quickly drove back to the spot, but unfortunately they were still there. 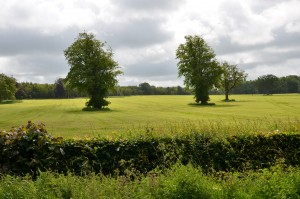 And this is where it all goes wrong of course. Regular readers of this log of (mis)adventures will be wondering why there has been no mention of either party getting lost. Well that’s because everything had gone like clockwork, with every meeting being kept exactly as planned. Therefore, it was bound to go mammary glands to the vertical. I freely(ish) admit it was (mostly) all my fault, as we hadn’t checked through the itinerary for the day before the off. This meant that I was expecting them to travel via a different route to the one they were actually following. Which in turn basically meant we were separated for 4 hours, without any phone signals and with no idea of where either of us were.

Old fashioned technology helped, as there was a public phone box in Newcastleton, on which I was able to call Mike’s mobile and leave a message for him to meet there. This they eventually did, and three dehydrated and starving riders pounced on their crisps, sarnies and water. 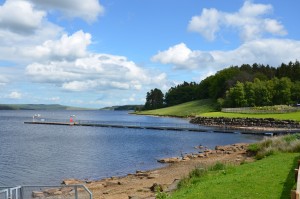 Overall, the drive this day was really beautiful and the section down to the lakeside of Keilder at the Leaplish Centre is no exception – very nice views of the lake and a very peaceful place. It’s funny but the water in the reservoir doesn’t really look Chinese to my untrained eye.

But then the vertical mammary situation returns. Roger’s svelte, lightweight bike can’t cope with the very rough terrain they encountered and he punctures twice. As we’re still not able to communicate, while Roger and Mike walk, Steve is volunteered to ride ahead alone and find me in the car park at Leapish. Having done so, he then sets off with the bike pump on his back to rescue Roger. The true spirit of Stanley lives on! Why is there no mobile signal in these wild parts? How do people live like this ? It really accentuates just how dependent we have become on technology in our lives. The situation risks eating into our much looked forward to sauna and swimming time at the hotel, and all because of O2 and Vodaphone. I think to try and persuade them to take a lift and cheat a bit, ensuring a prompt arrival at the hotel – but I know they’re just too principled and upstanding to agree to that – me, I’m just much more pragmatic (corrupt?). 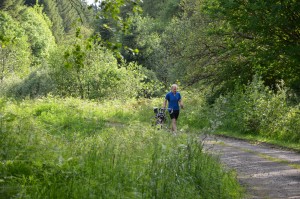 Once we got Roger sorted everything went fine, and we even had time to stop off for a pint on the way to the Riverdale Hall Hotel in Bellingham.

The pub we chose was great, really nice atmosphere and great beer. And even better, it lent itself to much scurrilous badinage, due to it’s name – “The Black Cock” – now, now quiet at the back, you smutty people!

Arrived at last at Bellingham, to find a nice hotel with it’s promised leisure facilities. So, after a swim and a sauna, it’s off to the bar for a swift pint, before dinner. The good beer was followed by a really excellent meal, with one of the best quality fillet steaks I’ve had. Everyone agreed that it was well worth the very reasonable rate, and well worth a return visit too. 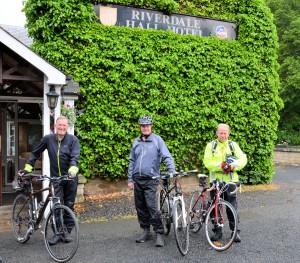 A good start to the last section of the route, with a very nice breakfast, and a bit of an earlier depart. The riders looking over the maps and not liking what they saw – climbing, and lots of it – all the way to Ponteland.

It’s raining again, but that didn’t persuaded Mike to get out the perverts poncho…. Thankfully. However, all the available rubber wear was being donned – allegedly to keep out the water. 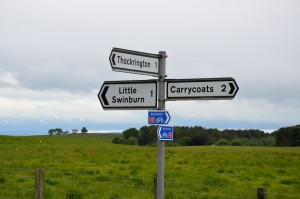 First meeting point was planned as the Colt Crag Reservoir – providing I could find it….Well, I had to travel on single track sheep-only roads, but I got there.

Rather scary and almost off road, but bleakly beautiful at the top. 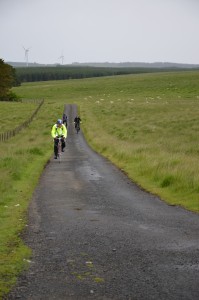 Next stop Matfen; where the riders had just finished the heaviest climbing and will therefore need a rest and a drink – they really are delicate flowers you know.

Well the friendly landlord at the pub in Matfen quickly saw through me as not being “local”, or as some kind of ruffian, and swiftly saw me out of his car park. “It’s Sunday, we don’t open until 12” (it was 10 to). So I found the village coffee shop and had a pretty awful decaff, no make that really vile decaff. Matfen is quite picturesque, but there’s a definite feel of “local things for local people” about it. I’m taking bets there’s rampant witchcraft and sacrificial offerings in the evenings – after all there’s not much else to do. The riders arrived in good time and were grateful for the rest and a (less than vile) coffee, after the climbing and damp conditions. Apparently that’s the last of the climbs, and so no more moaning. Now on to Ponteland.

Meeting in the car park of Waitrose is typical of our social standing of course, and a nice lunch of Waitrose produce underlines that fact. Not sure what the great and good of Ponteland thought about our scruffy, unshaven, smelly bunch having a picnic in the Waitrose car park, but our natural poise and air of superiority came through. 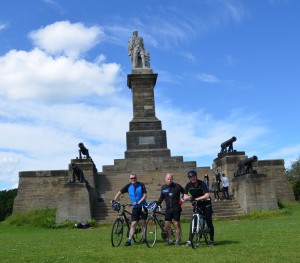 Next meeting point Backworth. Not much to write home about, an old pit village, looking a bit run-down. But the riders were looking remarkably chipper considering their fatigue, this was likely due to the knowledge that the next stop, is the last stop. On to Tynemouth.

No last stage dramas, everyone arrived on schedule and in one piece. After a photo call under Collingwood’s column (ooh matron), a nice pint in The Head of Steam, a few philosophical remarks on life, the universe and sore bums. Then off home.

It’s been another enjoyable trip, albeit with a couple of dramas, but then, that’s what adds spice to the dish anyway.

Discussions underway of where to go next year, but one thing’s for sure, wherever it ends up, It’ll be a laugh.