….. stays these couriers from the swift completion of their appointed rounds (Herodotus).

Not content with trailblazing a route from Newcastle to Edinburgh in 2012, our intrepid band have now decided to forge a course from the West to East coasts, beginning in Ravenglass and ending in South Shields. Along the way they will be visiting such fleshpots as Silloth and Prudhoe (all without a gum shield or a Kevlar vest in sight).

(And as for snow, rain etc., I’m sure they’ll hide in the back of the support vehicle at the merest hint of precipitation.)

However, training is already at an advanced stage, as is equipment fine tuning. This has largely consisted of working on our tolerance to alcohol, and Steve actually fitting some brakes and tyres to his machine – that should prove to be quite a novelty. The journey is to be undertaken without the aid of oxygen or Kendal Mint Cake (that’s a measure of just how tough we are), and as a large proportion of the route is in The Land That Time Forgot (Cumbria), we are also training to survive on Cumbrian bush-tucker (i.e. pies, crisps and mars bars).

The 3-day event began with a fairly uneventful drive to Ravenglass in southern Cumbria. Mind you, any drive with Michael at the wheel isn’t exactly dull – unless you’re used to driving alongside a Norwegian rally driver. 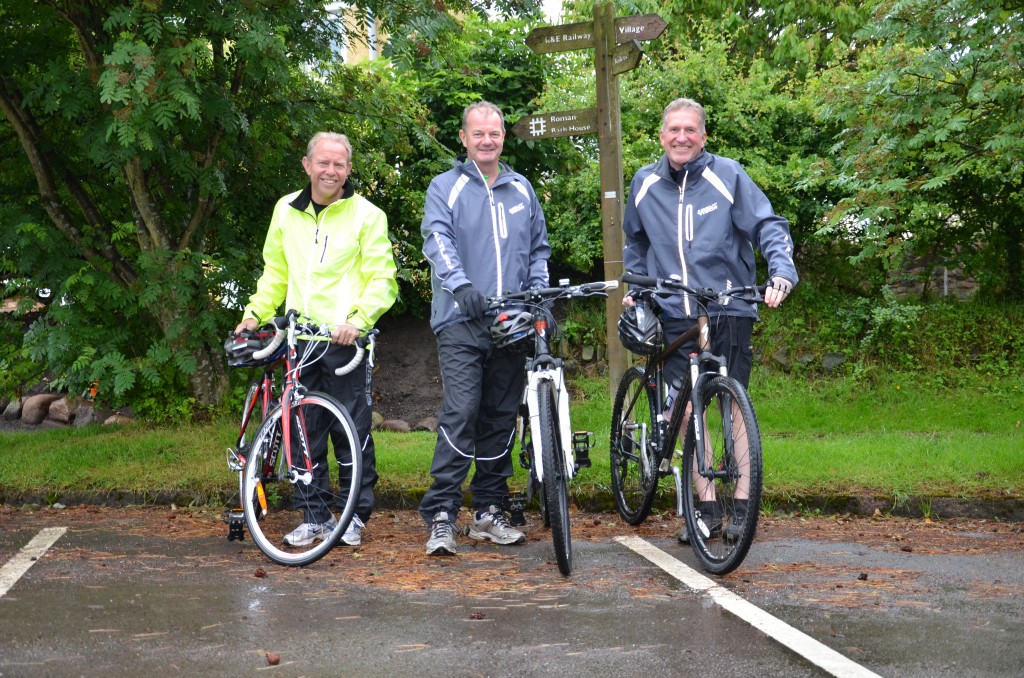 Fresh faced, and ready to go.

Awful weather and fairly oppressive surroundings. Getting to the Sellafield railway station for the rendezvous was a bit of an eye-opener : razor wire everywhere and security very tight all around, reminded me of the old East Berlin. Cancelled my idea of stealing some plutonium to play with. The Athletes arrived in the car park dripping wet and not happy (no change there then). 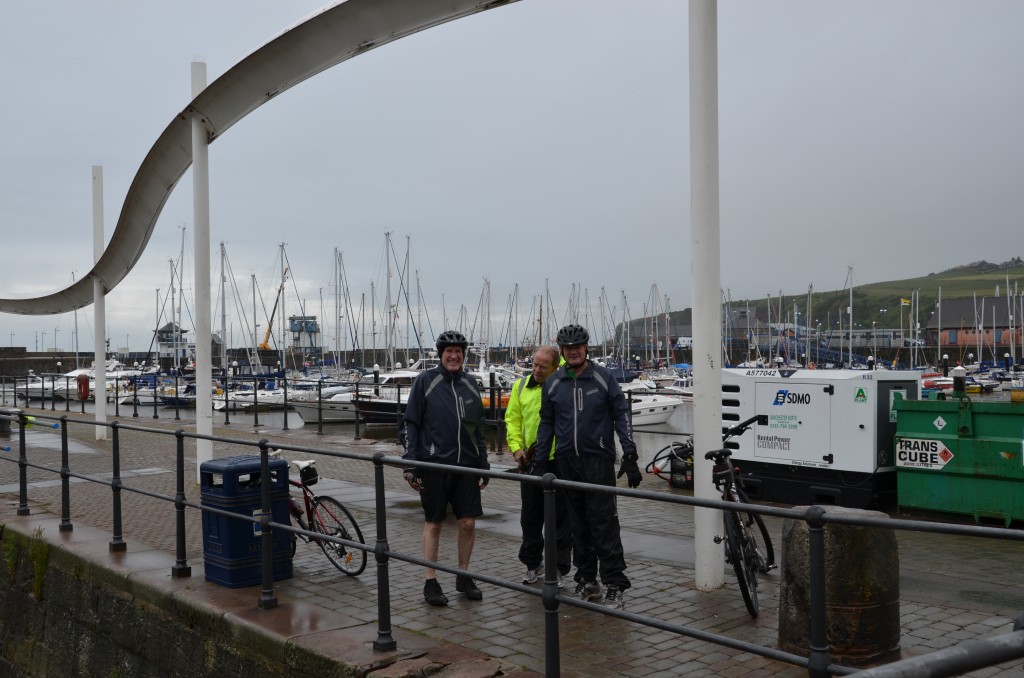 This part of Cumbria isn’t exactly pretty – unless you’re drawn to closed industrial sites, run-down council houses and dead fish. Wet all the way, but at least it let up in Whitehaven. We met in the marina area for lunch. The riders arrived cold, wet and a bit miserable, but a hot cup of coffee cheered them a little. People actually come here on holiday you know! The American couple in the pub (half of Peroni so I could use the facilities), had come to Whitehaven instead of going to The Lakes – well done, what a good choice. 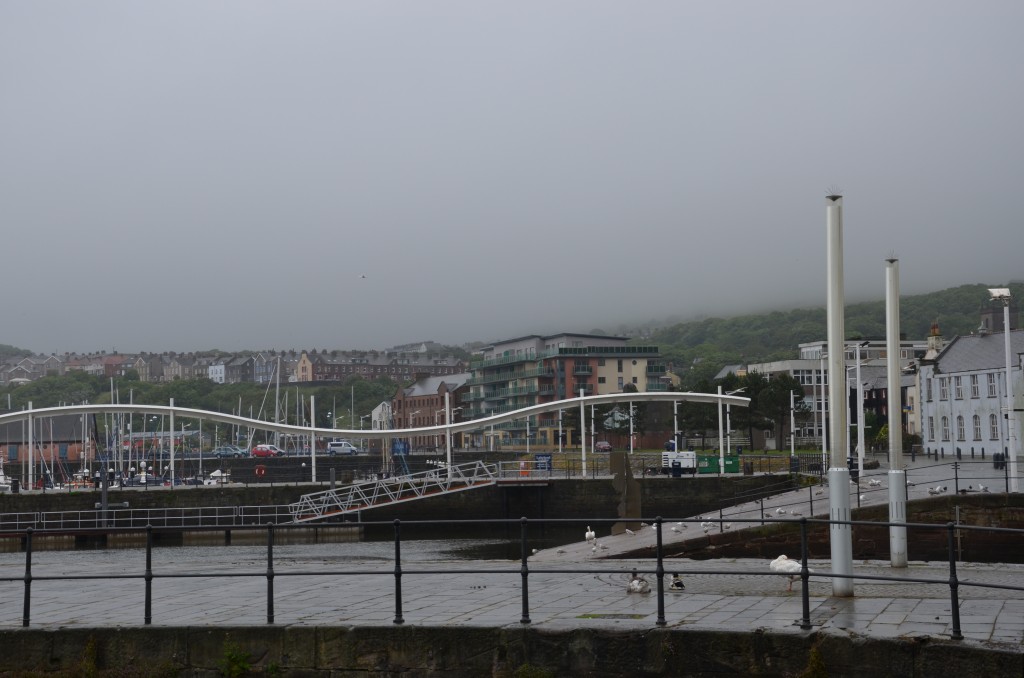 Raining for a change

It didn’t rain for a bit! While waiting I had a walk around the Maryport marina and soon felt my soul dropping into a slough of despond. Crumbling relics of a fishing industry gone for good. The bikers had double insulated themselves for this section and were glad they had. We then had a bizarre conversation with the marina’s own jobsworth. 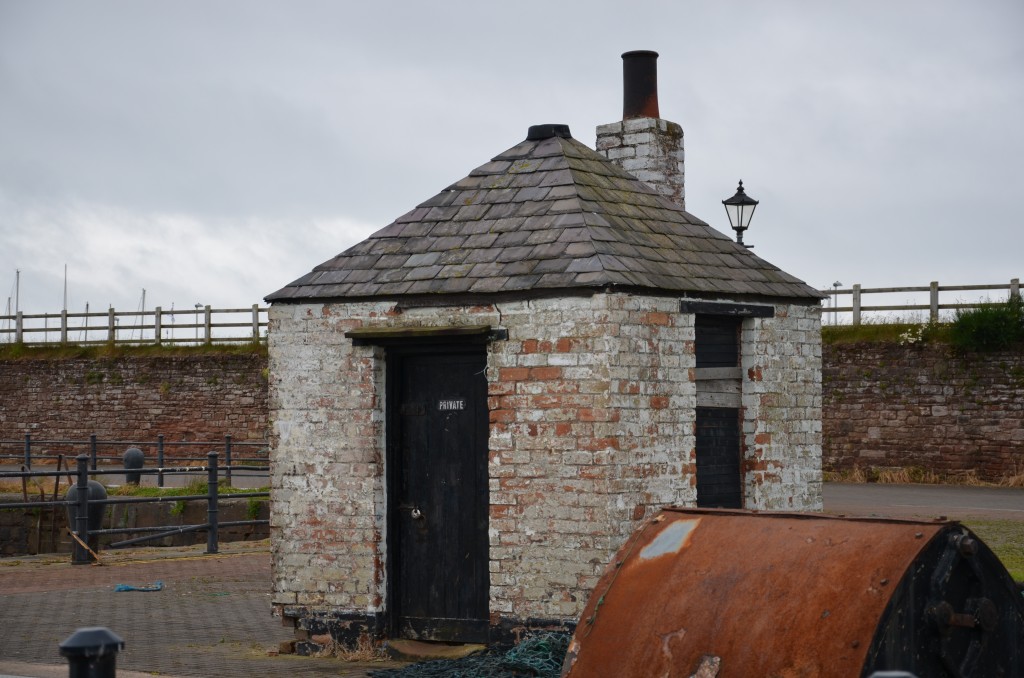 We were told to leave the car park because it was for members only and they have problems getting to their boats because of people like us. There were 3 other cars in the pretty large car park and about 6 boats in the marina – go figure. 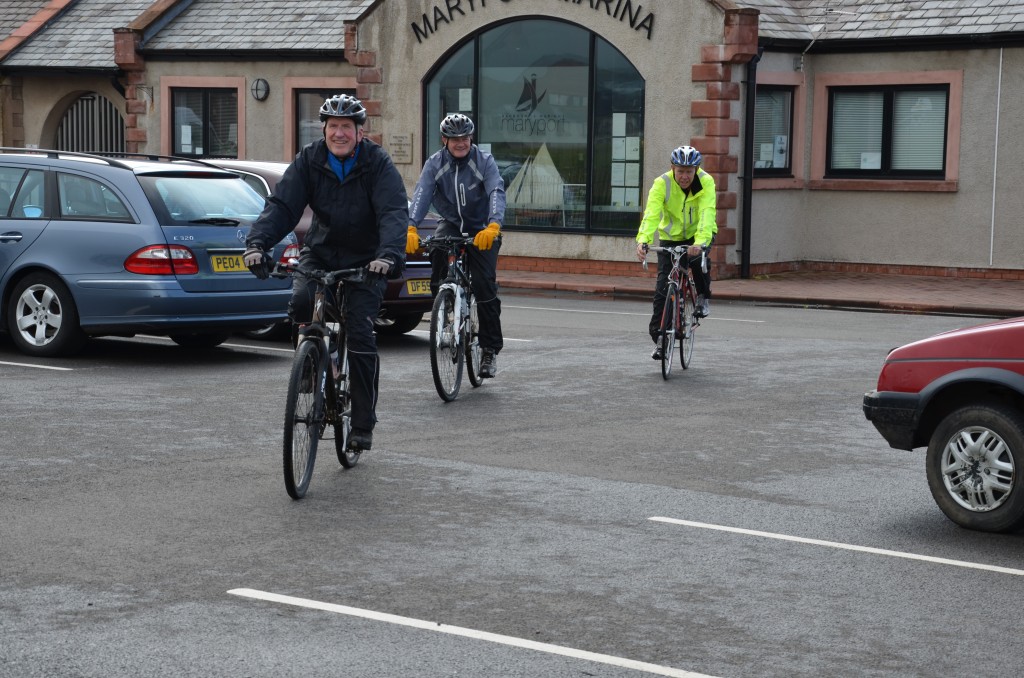 The best section yet by far. Great views across the Solway Firth AND the sun even came out for a bit. Easy to spot the riders from a long way off thanks to the aforementioned gloves. Arriving in Silloth, The Golf Hotel was much better than I had expected – sorry Silloth for my negative expectations. Quite a nice little place, especially if you like cobbles, with a park in front of the hotel. No doubting the direction of the prevailing wind – I’d not really realised that trees could grow horizontally. The bikers seemed to enjoy our first pints of the tour, well except Roger who stuck to his shandy – which as we know is impossible to enjoy. A Nice bottle of Malbec with a very good dinner too.

The Golf Hotel – No golf In Sight 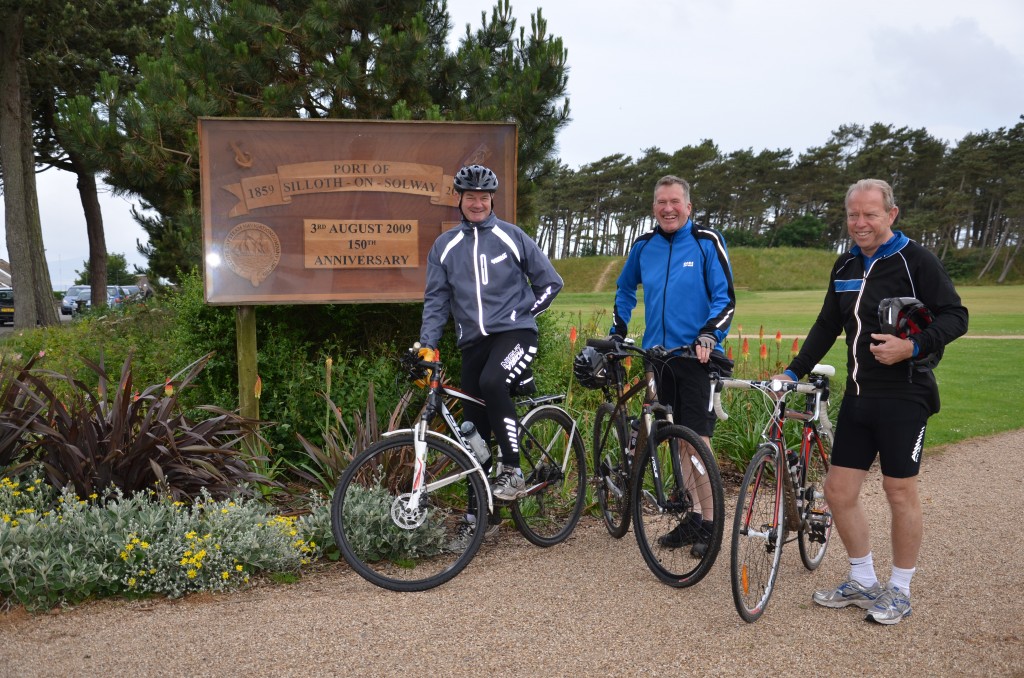 Very good breakfast, but the haggis was off (as in not on the menu, rather than rancid). Most importantly, it wasn’t raining! Very nice route along the coast of the Solway Firth – loads of birds. An ideal area for those of a bird bothering persuasion (Hi Chris and Mike!). Michael had a puncture, which was to be expected, as he’d had about 12 on the previous tour. Mind you, how Steve didn’t puncture is anybody’s guess, what with his totally bald tyres (think Yul Brynner after a run-in with a particularly sharp Gillette GII).

More of the same, very flat and quite bleak, but in a nice way. Angerton quite a pleasant little village, but with a bit of a weird atmosphere – the big wicker man with the screaming policeman inside didn’t help. It also had a pub that was really dropping to bits, reminded me of the “Slaughtered Lamb” pub in “An American Werewolf in London”.

I was just pleased no one was around to see The Andy Pandy Gloves, things might have got ugly. 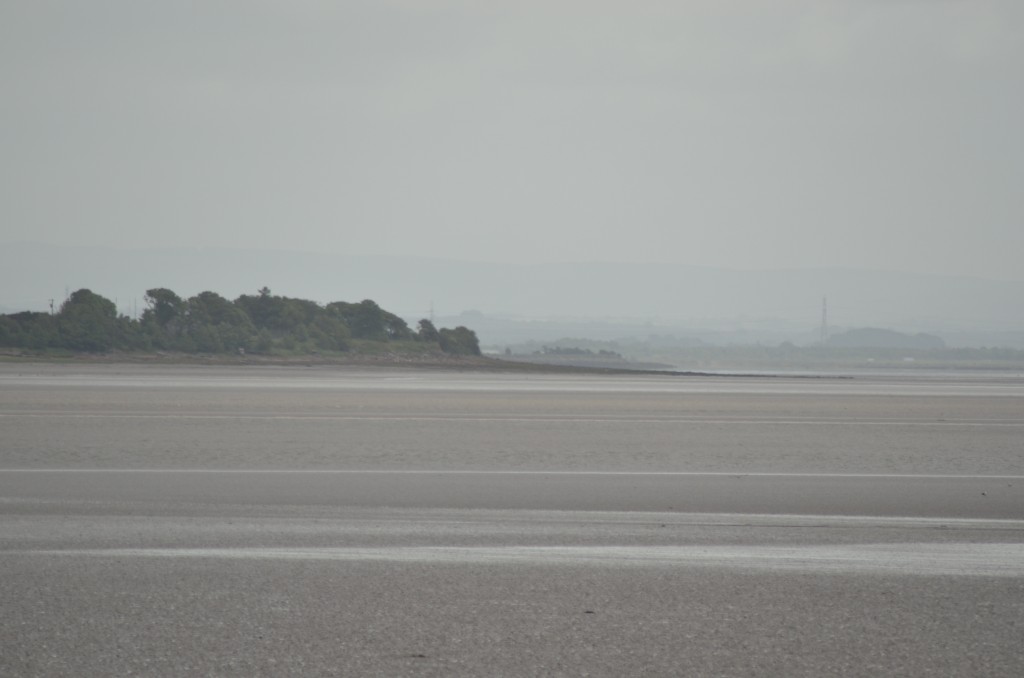 Nice stop in a lay-by for deli-made sarnies (thank-you Ian), a drink and a wee in a farmers field. Steve reports a very shore knee and Michael a shore rear. Request from Steve for Ibuprofen, paracetamol and amyl nitrate – where does he think we are, Blyth? Michael remains stoical, refusing all artificial aids. 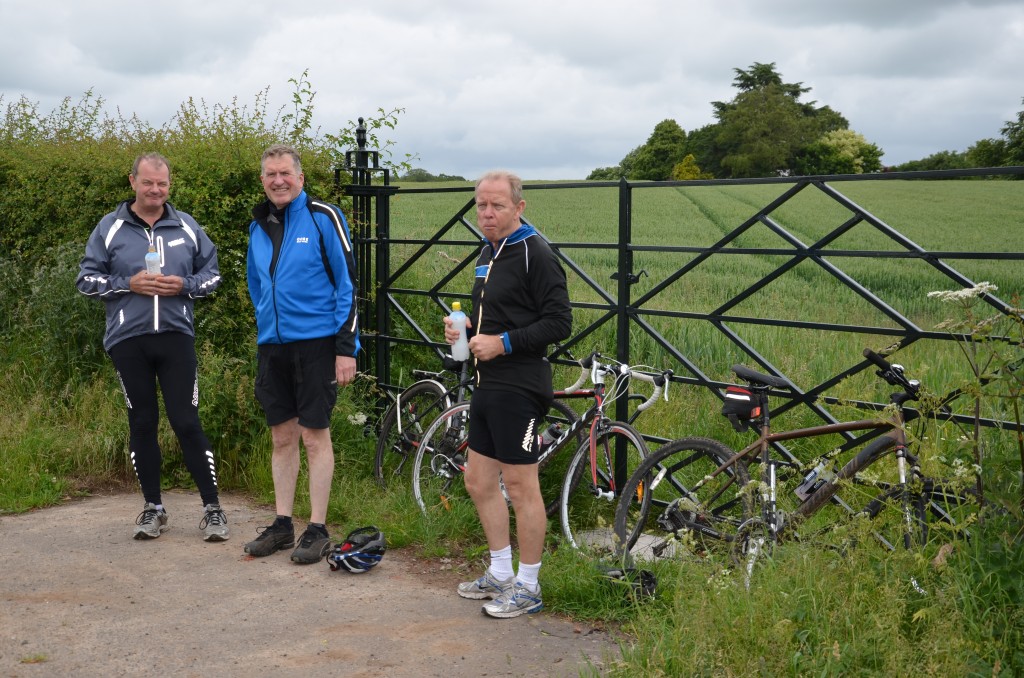 I detoured to Brampton to buy drugs for “Lance” Brown.

Even while driving I noted a lot of climbing, but I persevered and made it through OK. Of course the riders had a good moan about it. Steve now taking handfuls of various drugs – including the pain killers, jelly tots and some weird über-caffine dextrose jellies. This is what comes of working in psychiatry for so long (“I’ll have a pink one and a red one, washed down with my methadone”). 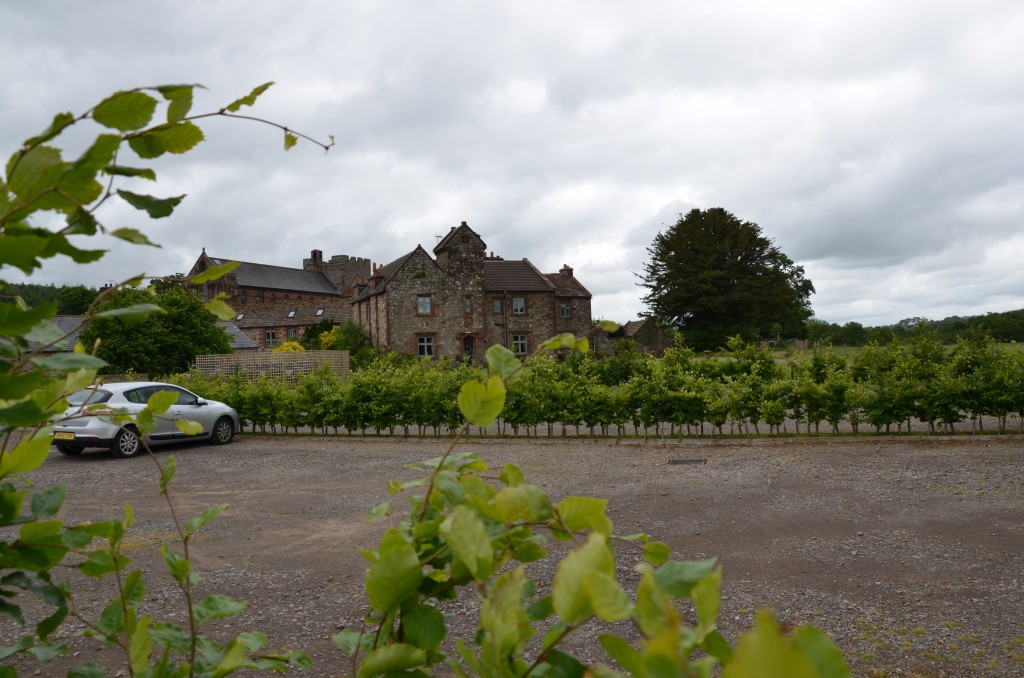 Toughest climbing yet. The riders were tired but staying with it. Steve’s drug habit is getting him and his knee through. Michael’s gloves still providing light entertainment. You may notice that Roger doesn’t really come in for abuse – he’s a solicitor, and I’ve heard of the libel laws. 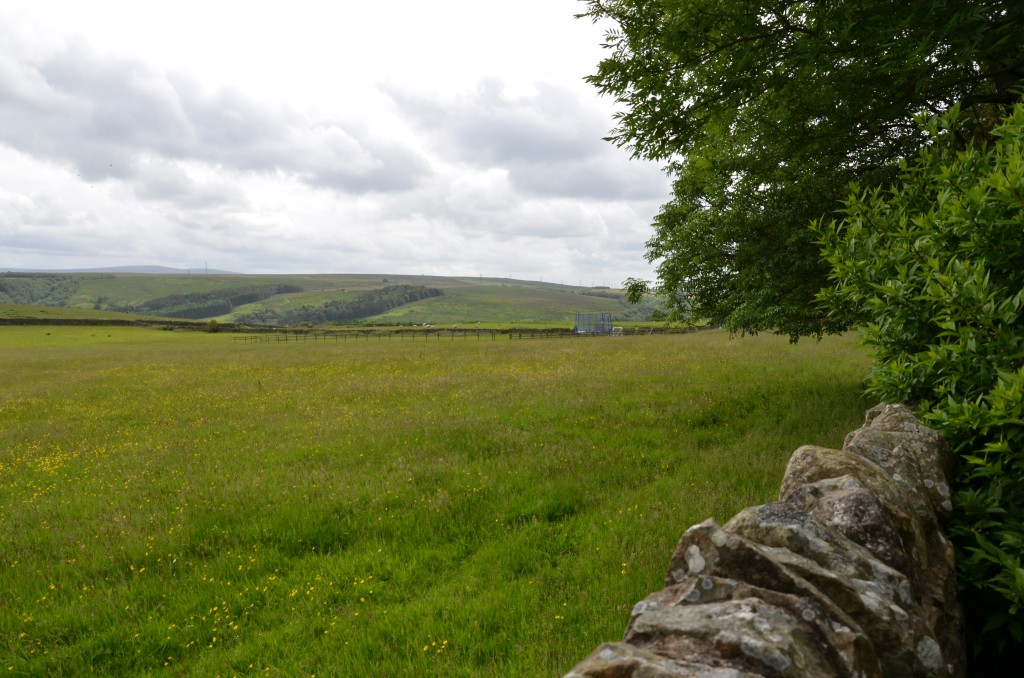 But £6:50 for a ticket into Vindolanda is daylight robbery, no matter how big the site now is (“ahh look another pile of stones”). They’re careful to make sure the toilets are on the other side of the ticket office, and for use by ticket holders only. The most expensive wee I’ve had in a while, certainly since the episode with the llama and the toasting fork. 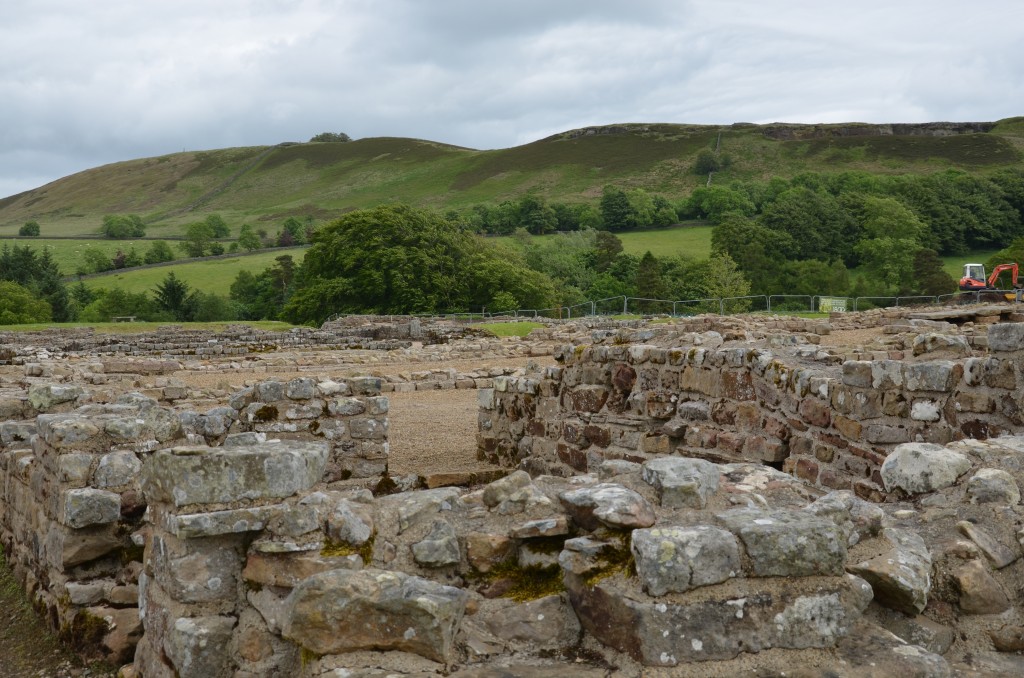 I Love Stones Me

Great road over the tops, running parallel to the wall. But of course all the climbing wasn’t what the riders really wanted (you just can’t please some people – maybe Netherlands next time?). Steve’s knee much improved, but Michael still refusing to join the drug culture, even though his arse was like the map on Bonanza. 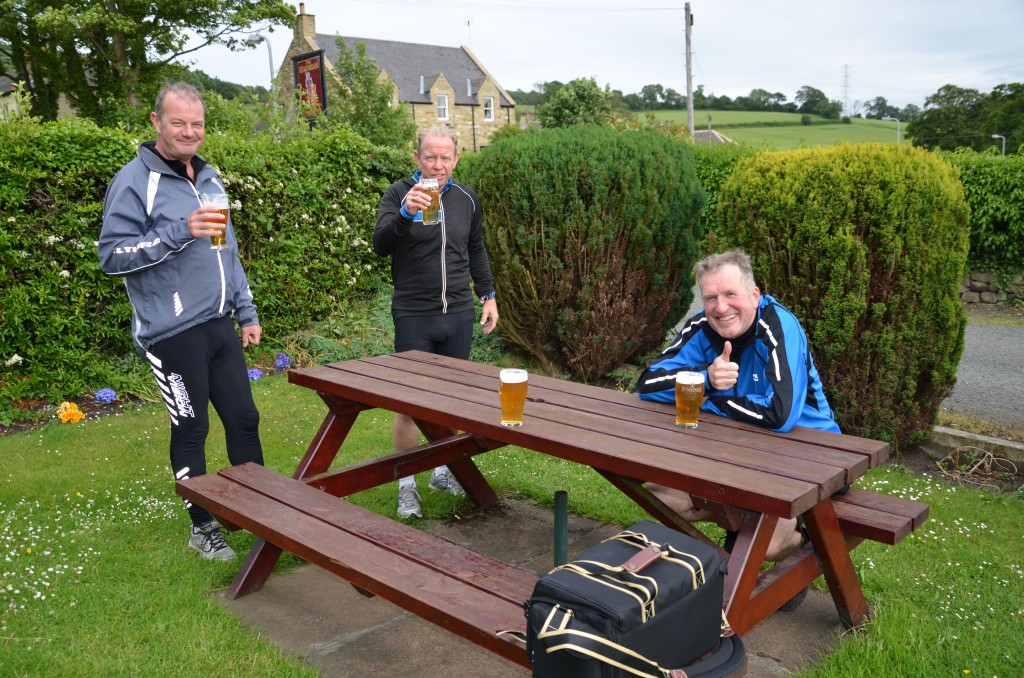 A Pint At The Hadrian

More long straight Roman roads, and  the end of a very long day. The final hill climb up from Chollerford was a bit of an unexpected killer I gather. They all agreed that it was nice to get to Wall and the Hadrian hotel, even if The Hadrian was a bit shabby. Excellent beer and a very nice dinner. The four bottles of Malbec went down particularly well – I could get used to this alcohol stuff, if I really stick in and train for it. 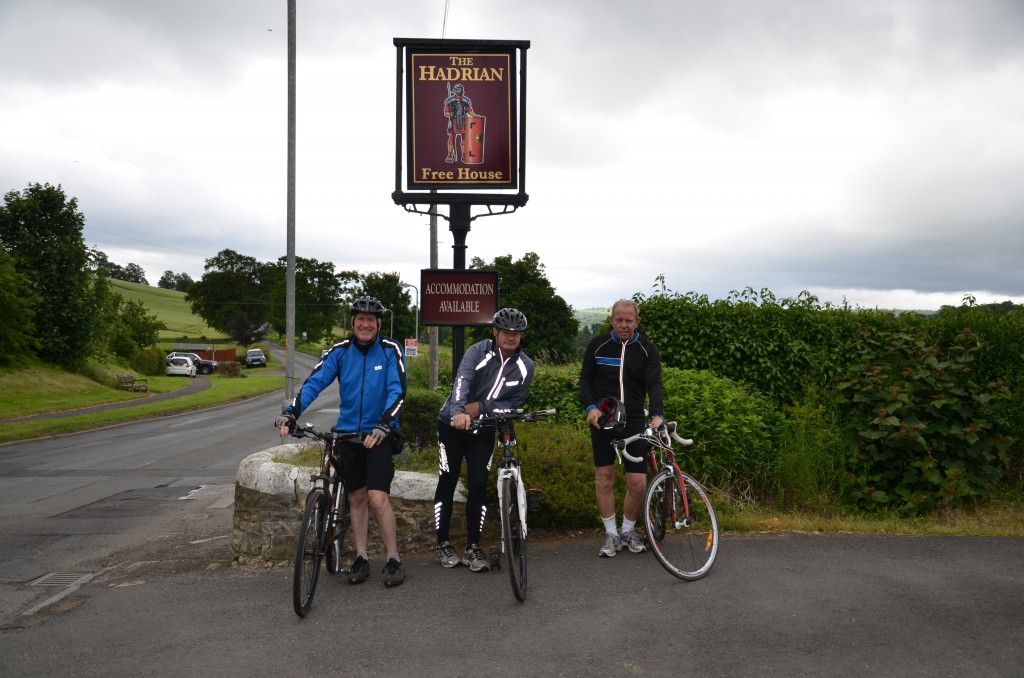 Goodbye To The Hadrian

Another good brekkie, the haggis was on this time. Weather a bit gloomy, but at least no proper rain. While stiffness and chafing continue to niggle , they still set off on time, heading for Corbridge. Michael taking a devil-may-care attitude and discarding his Andy Pandy’s. It feels like we’re almost home; well actually that’s because we are. Roger in particular could smell the coffee in his kitchen from here. Corbridge was it’s usual twee self (but very nice) and quite busy for so early in the day – probably church-goers – a foreign land to brazen heathens like me.

Weather better –  warm and dry. I think the section was a bit further than they expected, but it ended with a welcome coffee at the Keelman. 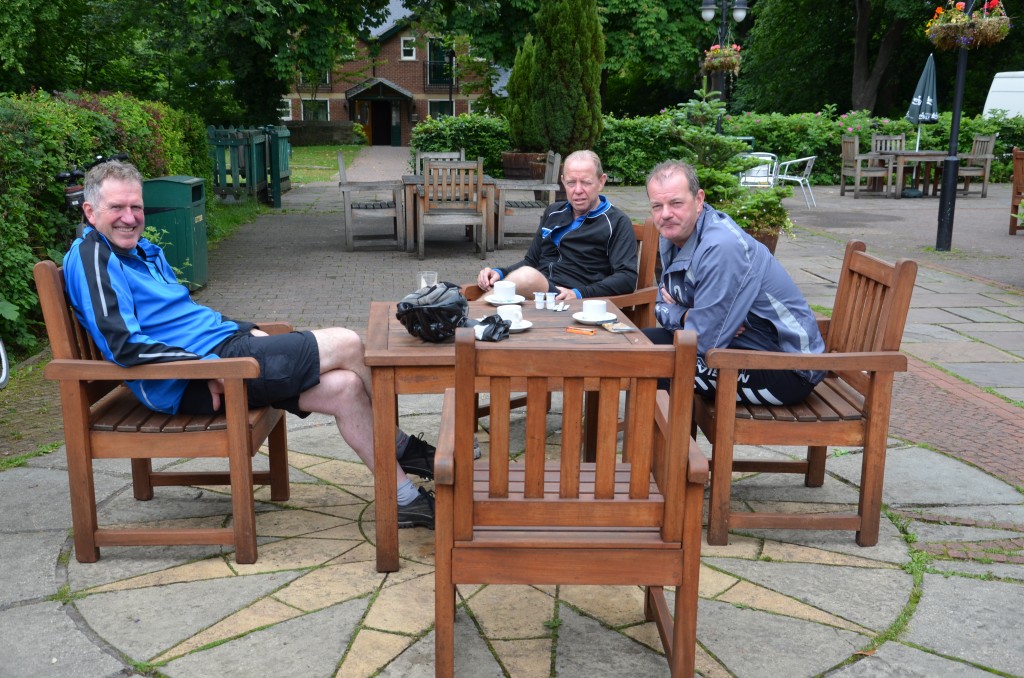 The flat, paved and tarmac’ed paths spoil them. No rain and really warm too. Bit of a break for the riders on the ferry, while I sit in the blazing sun having a half of Hobgoblin (it’s a tough job etc.). 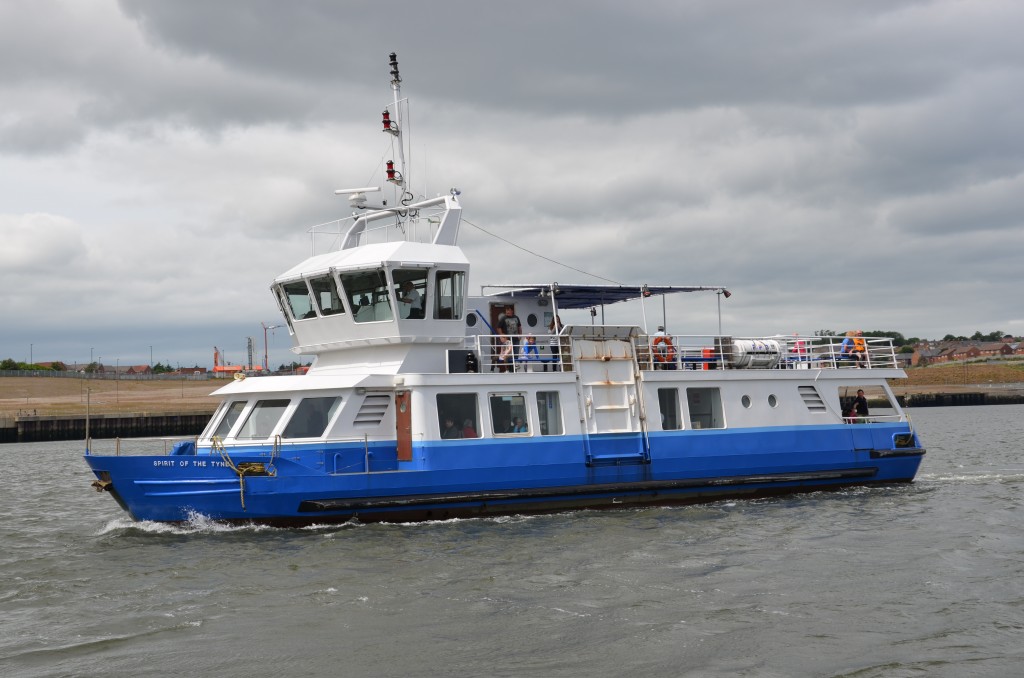 The Ferry Arrives in Shields 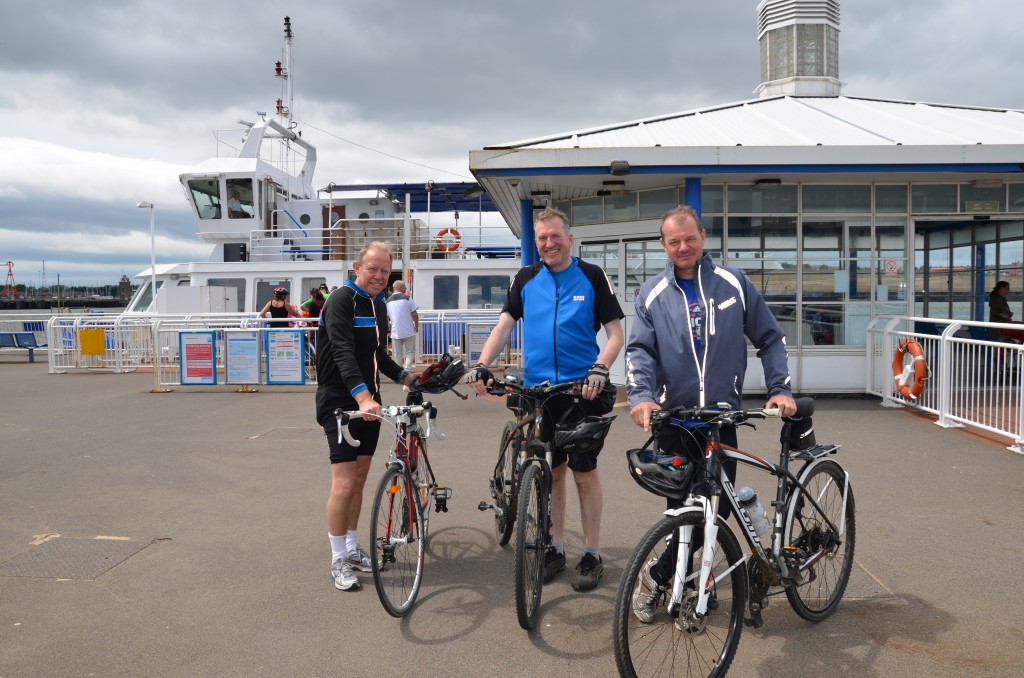 Back on Dry Land

South Shields ferry to The Sundial :

We’d planned to go to the Sand Dancer pub but I messed up and was waiting here for them. Bit of a dump. The pub stinks of cheap larger and burnt lard – but some unpleasant aromas as well. Michael’s car door gets a scrape in the car park – the only damage inflicted over the three days, thanks no doubt to some knuckle-dragging chava (what judgemental? Moi?). Bit of an anti-climax on the whole.

And for next year….. Ijmuiden to Groningen?